My friend Greg stopped by my house this weekend to say hi. Since he’s handy, I put him to work to help fix a wooden gate that was coming off its hinges (don’t feel bad for him. He likes doing that stuff). Since the hinge had cracked the wood, I figured I needed to replace the whole 6′ of wood in what would be a four hour job (I calculated two hours really, but experience has taught me to double any project I take on — and have band-aids at the ready). Because Greg looked at the whole gate and not just the cracked wood, Greg had an easy solution that he was able to implement in under twenty minutes. Rather than replace the wood, Greg simply replaced the screws that held the hinge with bigger and fatter screws. To him, the wood wasn’t the problem. The wood coming away from the other wood was the problem. Six screws later and everything’s now as good as new. It’s interesting how by focusing on the cracked wood, I prevented myself from seeing the various solutions for the real problem which was holding the wood (and thus the hinge) to the fence.

Later that same day, I read a post by a marketer who claimed that ALL traditional advertising was a waste because today’s buyers of goods and services care more about the social activities of the brands they support rather than the sales that are pitched in traditional media. That is, to me, a total misunderstanding of how the various media work. This writer is looking at the split wood, and not the gate as a whole.

In the past, those messages were very direct. “Buy Now!” “Sale of the Century!” Or even “Free Coffee!”  People either reacted by calling or visiting, or they didn’t.

Today though, people have more choices than to act or not act. They can research on their own, talk to their friends, or even look for other clues that say the client’s product or service is worthy of their allegiance. So today, advertisers must not only use traditional media to get exposure, they also must use virtually every other media the market uses in order to be relevant.

Esurance understands this. While their TV spots have, for years, focused on the ease of getting coverage from them, even going so far as challenging Geico’s “5-minutes could save you up to 15%” message, these spots have lacked a personality. They did not give Esurance anything unique to which the market could identify.

But now, using traditional media, Esurance has planted itself firmly on the left side of a very public debate. Their personality is clear. And its up to the market to decide if this is a company with whom they want to do business, regardless of whether they can save 15%, 25% or more.

So why would Esurance use traditional TV to promote their allegiance to couples who marry, regardless of their sex? Because TV is still the best way to get a message out to a large audience. It’s that simple. In fact, according to a 2015 study by Turner Broadcasting, Horizon Media and marketing-analytics company MarketShare that measured ad performance across a variety of industry and media outlets, TV has the highest efficiency at achieving marketing goals — even averaging four times the sales life of digital. What’s more, the latest Total Audience Report from Nielsen for the first quarter of 2015 shows that television continues to be the most used medium. Adults (18+) on average spend 36 hours, 7 minutes watching TV each week—that’s more than the combined 29 hours, 23 minutes spent with their PC, smartphone, tablet and radio. And radio, in second place at 12 hours, 58 minutes, still beats the newer devices: smartphone 7 hours, 17 minutes; PC 5 hours, 34 minutes; and tablet 3 hours, 34 minutes.

So while the writer I mentioned above may have experienced a decline in the effectiveness of traditional media, my guess is that it is his fault because he’s running the wrong type of spot. Just like I was looking to replace the whole piece of wood, he is looking to replace the whole medium as if it’s the medium’s fault that things aren’t working. Try using new screws!!

I have no doubt that Esurance’s emotional spot will do exactly what it is meant to do — give a lot of people a clear message about the brand that is Esurance. And while running this on social media will certainly extend the reach, I have no doubt that traditional TV is the best place for Esurance to put forth such a message.

Mom's Cutting Back On Spending 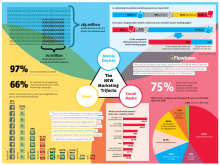 The New Marketing Trifecta: Where do you fall?