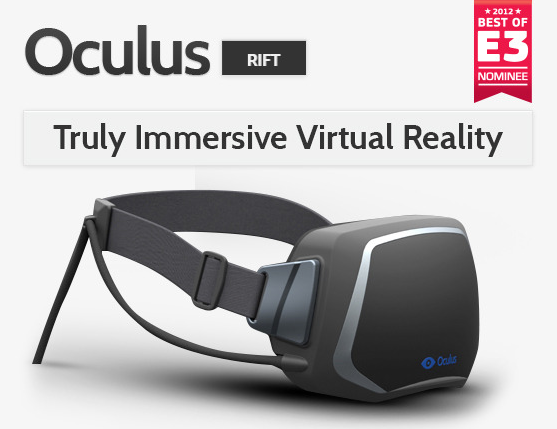 How Advertisers Might Use Virtual Reality and the Oculus Rift

Early this week, Facebook announced that it would acquire Oculus Virtual Reality, the creators of Oculus Rift for $2 Billion. Oculus Rift (or “Rift” to those in the know and proud of the dorky name), is a virtual reality headset designed by then 19 year old Palmer Luckey, a virtual reality lover and taker-aparter-of-things sort of inventor. For many people this acquisition move came as a surprise—especially the Kickstarter supporters who helped the company launch two years ago with a pledged $2,437,429—far exceeding the Kickstarter goal of $250,000. Why would Facebook want a company focused on virtual gaming?

The company founders, Luckey, John Carmack, the 90s programmer who made the games of today where you can walk through worlds rather than only left to right possible, and current CEO Brendan Iribe were even surprised originally by Zuckerberg’s interest. Iribe acknowledged in a Time article, that when they met up with Facebook, Zuckerberg called it the next “computing platform” and their reaction was, ‘”Wow! We are looking at this whole thing being just that gaming platform. But tell us more, Mark.’ And he started to describe it, and we started to believe it too.” Zuckerberg said on their Facebook announcement, “Mobile is the platform of today, and now we’re also getting ready for the platforms of tomorrow. Oculus has the chance to create the most social platform ever, and change the way we work, play and communicate.”

So what exactly are the potential social experiences? A few that company founders mentioned in the Time piece:

And as an advertising company, we have to go there—how will companies take advantage of this new medium? When you consider how businesses jumped into Second Life, the virtual world (Best Buy established a “Geek Squad” island, American Apparel opened a store), it isn’t even close to a stretch to see that companies will be cleverly figuring out how to make Rift work for them.

Considering Virtual Reality’s biggest draw is the ability to take you somewhere, here are a few possibilities on how advertisers might leverage or offer a Virtual Reality experience:

Of course, it’s fun to speculate when the technology is just being launched. All of this depends on the widespread adoption of the medium, and whether Zuckerberg is right to foresee this as the future.

I will leave you with this. While some these ideas are exciting, let’s hope it doesn’t all go too far. I catch myself zoning into my phone far too often to not be afraid. The idea of a virtual social future has the potential to take us somewhere I don’t want to go. The Time article quotes the Oculus CEO: “When you add other people to it,” Iribe says, “and you can actually see somebody in that place and you can make eye contact, and you can look at them and they can look around, you can now have this shared sense of presence in this new gaming experience, entertainment experience or just social experience that really starts to define what virtual reality is all about.” I cannot help but be a little frightened by this vision, which makes me recall “Surrogates,” the 2009 Bruce Willis movie about people who live in their houses, holed up on virtual reality sets, making Avatars walk around the virtual world and do the living for them. Or Disney/Pixar’s Wall-E, which predicts a future where the human body becomes a blob and where we forget to actually look up at the real world around us anymore. Could this be our future?

What other ways might advertisers use Virtual Reality and the Rift?