According to a new report by the Pew Research Center’s Internet & American Life Project people ages 50 and older are joining social networks at an ever increasing rate.

Why is this happening? Well I’m sure you can guess. Older adults want to connect with friends and relatives. But to me, that’s the easy part of the answer. The other half of the answer is in how new technology is not just being created — but designed. 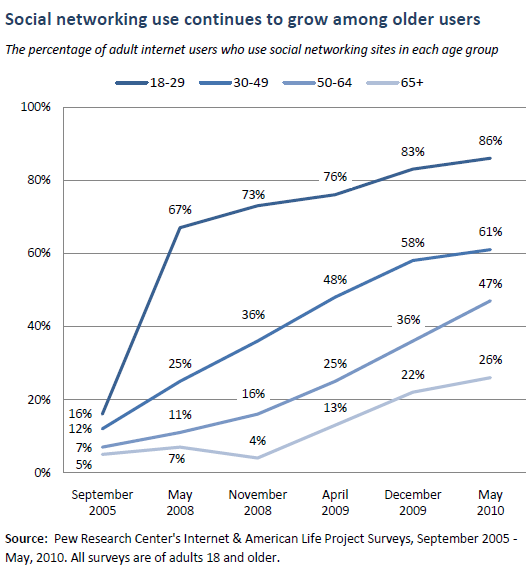 The doubling of any population is unarguably a dramatic increase. Any time you see a change this substantial there must be multiple elements at play. Older adults aren’t just joining social networks because their friends and relatives are there. They’re joining because they are able to figure it out on their own.

Let me clarify. What we’re seeing is a massive cultural shift towards technology — in part because of good design. We have a tendency to stereotype older adults as at best not tech savvy, and at worst Luddites.

As tools become easier to use and better design is incorporated into computer hardware, software and websites the intimidating or hard-to-use “tech” part of technology dissolves away. Older adults no longer need to rely on a grandchild or neighbor to help them. Now, if they can read the screen they can pretty much do anything. I would argue that the problem never was that most older adults were not tech savvy, but that they just didn’t have the patience to deal with something that wasn’t designed intuitively.

Better design isn’t just for those who are not techy. Better design is for everybody. Better design makes things that are complex usable. I’ll go even further. Creating something that is not designed well is inexcusable. There isn’t a single man-made object on this world that can’t be improved with good design from a paint can with a built in roller tray to a superbly designed and well organized website.