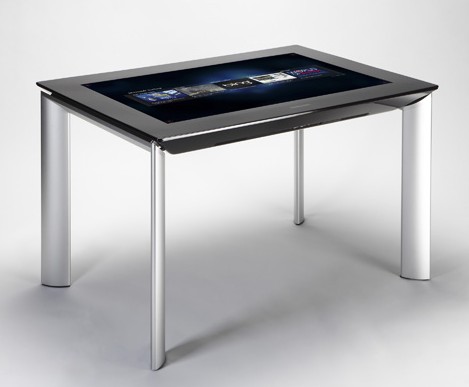 Mahogany Desks Are a Thing of the Past: Introducting Surface and EXOdesk

I’ve never been one for luxurious items but just the thought of owning a rich, mahogany desk would be awesome. Then I saw a couple of desks that fed my inner-geek appetite and mahogany quickly felt a little too ancient. Microsoft and EXOPC are introducing desks that are comparable to those seen in recent Sci-Fi movies. Giant touchscreen tabletops turn your desk into the computer.

The Microsoft and Samsung collaboration is known as the Samsung SUR40 for Microsoft Surface and can be pre-ordered for just under $9,000. Hopefully Santa is feeling extra generous this year. You can check out the SUR40 here.

The competing touchscreen desk is made by EXOPC and is known as EXOdesk. This desk is being released in 2012 and is on the more affordable side at $1299.

I only have two questions regarding these desks of the future: