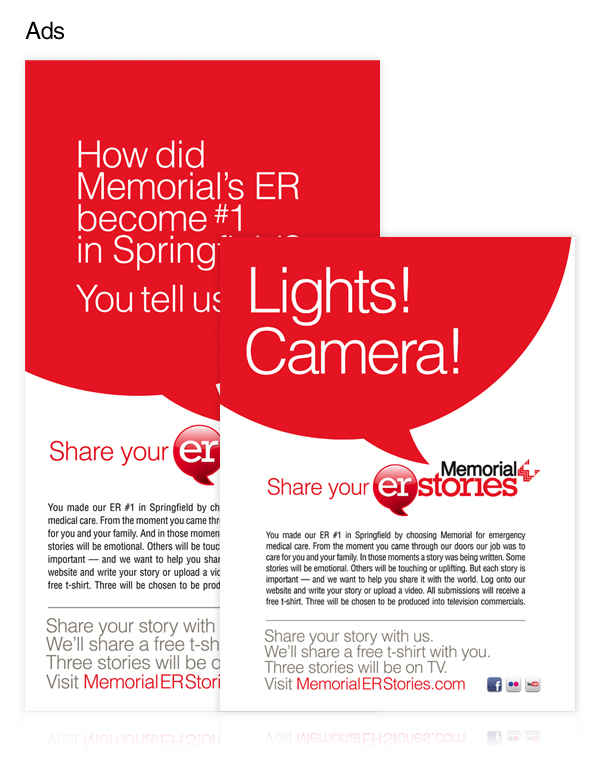 Memorial Medical Center has the #1 Emergency Department in the Springfield area. How can you express this incredible achievement without being boastful? You let the patients say why you’re number one based on their experiences. From this simple idea came a remarkable campaign that was not only successful but also inspiring & heartwarming.

The Memorial E.R. Stories campaign succeeded on a statistical and emotional level. At the date this post was written, we have read through 82 stories all submitted by patients of Memorial’s Emergency Department. Some stories left us smiling, some inspired us, and others left us teary-eyed.

We knew this campaign had a lot of potential so we used our concept of web herding and spared no advertising medium. We created a landing page dedicated solely to the E.R. Stories campaign. Content on this site was almost exclusively patient-driven. We introduced online banner ads, a custom Facebook tab, print ads, billboards, pay-per-click, bus wraps, radio ads, a commercial, and topped it all off with t-shirts for the story submitters.

Normally we would recommend dedicated URLs on ads for tracking purposes, but the client was concerned about keeping the brand consistent so we didn’t. So as the website got underway we carefully watched for specific trends. It was clear when an ad was running based on jumps in web traffic as various pieces were introduced. During the peak of the campaign, visits to the website were about 500% more than during the launch. Page views were up 200%.

Another interesting statistic involved a close competitor’s foot traffic. A competing area hospital opened up brand new facilities in late-November; just prior to the start of the Memorial E.R. Stories campaign launch. The patient visits to the competing hospital did not improve even though brand new facilities were introduced.

The Memorial E.R. Stories campaign has done its job, but won’t end just yet. Soon we will be turning three of the E.R. Stories into commercials. The patients from the chosen stories will have a chance to share their story in a commercial. Choosing just three stories will be a near impossible task, but it’s a task we look forward to. It was a real pleasure to work on such a captivating campaign.

Ed McDowell, VP of Marketing & Communications at Memorial Medical Center, was ecstatic about the campaign stating, “With more than 40 story submissions through the first five weeks of the campaign, the results speak for themselves. We could not be more pleased or excited”.

We could not be more pleased or excited either.

Below are just a couple images from the campaign. Check out more images and our case study for the Memorial E.R. Stories campaign here.