Get ready for surgery in the 21th century! On Thursday, April 2, at 7:30 a.m., Sherman Hospital will be the first hospital in Illinois to provide live “Tweeted” updates of a surgery — but not just any surgery — it will be a high-tech robotic surgery using Sherman’s da Vinci surgical robot. And we at Demi & Cooper are proudly running the program. Through the social-networking site Twitter, Sherman officials will provide a running commentary, updates of activities and photos of the procedure. Twitter users will continuously receive messages of 140 characters or less, called “Tweets”, by following Sherman at http://twitter.com/shermanhealth. It’s just one more example of some of the cutting-edge things we’re doing as part of the robust social media services we offer to our clients.

“Sherman Hospital is committed to becoming one of the best community hospitals in the nation,” says Christine Priester, Director of Marketing and Public Relations, Sherman Health. “This is an example of our forward thinking and dedication to educating and connecting with the community.”

The procedure, a hysterectomy, will be performed using the da Vinci Surgical System, a sophisticated robotic platform designed to expand surgeon’s capabilities and offer a minimally invasive option for major surgery. For the first time ever, future hysterectomy candidates will be able get an idea of what is involved with the procedure in a way they would never have been able to before.

Raja Chatterji, M.D., and Humberto Lamoutte, M.D., both OB/GYNs and surgeons on the medical staff at Sherman Hospital, will be performing the operation, slated to last two hours. Both Drs. Chatterji and Lamoutte received extensive training with the da Vinci Surgical System before receiving certification in 2007. Dr. Chatterji received his medical degree from the University of Cincinnati College Of Medicine, and Dr. Lamoutte received his medical degree from the Louisiana State University. Both physicians had residency at Charity Hospital in New Orleans.

Be sure to follow @ShermanHealth on April 2nd to watch the live hysterectomy. And while you’re on Twitter, why not follow Demi & Cooper too? Then you’ll know about events such as this one, as well as learn about the many different ways we use Tweets, blogs, eblasts, and other social media strategies to help our clients.

The Blackhawks Made an Impression on Advertising in Chicago 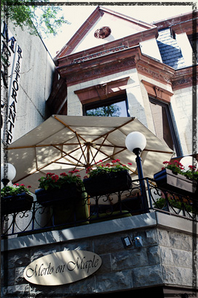 Merlo on Maple: Authentic Italian Food in the heart of Chicago