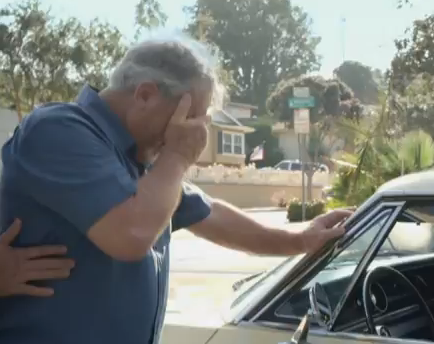 A problem advertisers sometimes have is finding the most cost effective way to publicize a product. What we often forget is that if it’s good enough, people get the word out on their own. A couple recent (and humorous) examples would be Old Spice and Allstate, but as much as I love to laugh, I’d say an ad that can instill goosebumps is even more likely to stick with me.

There are few who can make me react this way in just one minute’s time. Really, the only one who immediately comes to mind is Google. But I can now add Chevrolet to the list after viewing the best one minute ad I’ve seen all year.

We learned last week that this event was not staged, that Herb did in fact get his beloved Impala back after 20 years and seven owners, but the authenticity is apparent even without that information, isn’t it? Herb’s family knows how important the car was to him. It was more than a car, it was the memories that came with it.

Even Tim Allen, the new voice of Chevrolet, was given a supporting role as the family was allowed to tell the story in their own voices. The only time we hear Allen’s voice is at the very end, when he gives us the slogan.

Kudos to Chevy for making an authentic, touching, subdued, and shareable ad in just one minute’s time.