Our client, Sherman Hospital, to be featured on Good Morning America!

Sherman Hospital will be featured on ABC’s Good Morning America
on Thursday, April 16th, 2009 at 8:05am CST.

The surgery that we helped Sherman Hospital simulcast on Twitter and Facebook has helped a lot of people better understand the benefits of Sherman’s high-tech surgical robot and how they have become a leader in advanced medicine. Possible candidates for surgery in the community followed along and became more comfortable with the procedure. Even the patient’s family was able to watch on a Blackberry from the waiting room! We’ve helped Sherman get featured on TV, websites, blogs, medical journals, magazines and newspapers across the country and as far away as India and Australia. But tomorrow morning we’re proud to announce that they will be featured on ABC’s Good Morning America at 8:05am CST! Check your local guides for channel information.

With getting media attention, timing is everything. The press seemed to be primed for a great story about how Twitter and Facebook could be used for a practical purpose. We did some research and came up with the idea have Sherman become the first ever hospital to simulcast a surgery live on Twitter and Facebook. Not just any surgery, but a high-tech robotic surgery. It takes a lot of courage to do something like this, and we would officially like to thank some very important people at Sherman Health:

First we would like to thank Sherman’s patient (who of course remains anonymous) for graciously agreeing to let her surgery be Tweeted. Secondly, Doctors Rajah Chatterji and Humberto Lamoutte who headed up the six-person, robot-assisted surgery team. And let’s not forget the marketing team at Sherman:

Of course, you are also welcome follow myself @marcbattaglia and Walter Ottenhoff @wottenhoff — we work here at @demicooper and ran the simulcast for @shermanhealth. 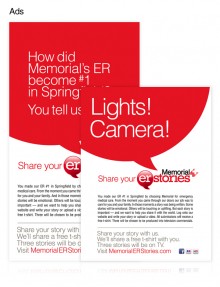 All PR is Good PR?